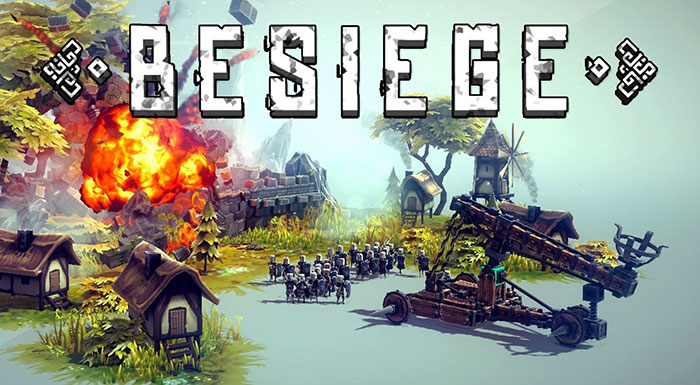 Besiege made quite a splash when it progressed from Steam's Greenlight platform into Early Access. A sub 10 euro siege engine sandbox that avoids limiting the player's creativity wherever possible - taking the block-building base of Minecraft and coupling it with engineering ala Kerbal Space Program to produce a pure castle destruction physics game.

The sandbox nature and lack of arbitrary limitations placed on the player is one of the game's great strengths. You're given an objective - destroy this building, kill this regiment, collect this object - and then you're given a single starting block to build from. How you accomplish the task is up to you; if you want to create a mechanically accurate medieval catapult, you can. If you want to go a bit more extreme you can build a mobile wall of cannons or flamethrowers. The decision to mix accurate historical construction with less serious weaponry is an inspired one, as it allows for some truly fun experimentation. The only real restriction is the bounding box that your machine has to fit in.

The Aesthetic of the Besiege is similarly pleasing. There's a great deal of what could perhaps be called 'selective detail' - the levels themselves are minimalist. The objective will be a nicely detailed and vibrant rendering of a Middle Ages windmill, for example, surrounded by a bit of an environment that simply floats in the middle of a vast blue space. If anything, it looks more like an interface of an incredibly polished piece of graphic design or 3D modelling software. It is, simply put, elegant.

The levels are designed in such a way that they play off the creative encouragement. Each level has a basic objective. They are very short, too - but the actual attempt at completing a level is the dessert of the meal - the starter and main come in the designing and building of your machine, and the attempts to fix mechanical problems or weaknesses that occur. When attempted with a suitable creation, each level will take less than a minute to complete, although it's perfectly normal (for me, at least) to spend upward of half an hour fiddling with the siege engine. The levels can be attempted, halted and repeated at any time via the play/stop button in the top left of the user interface. You can replay the last attempt, either to see what went wrong or to relive your glorious success. 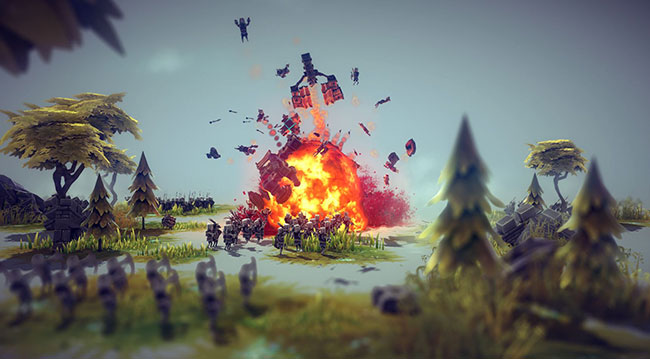 The actual combat itself is physics based. It's not the most realistic physics engine you'll ever see - cannon balls tend to act more like the balls from those miniature snooker tables - but it's easily enough to compliment the enjoyment that comes from engaging and reaches far beyond more primitive and previous castle smashing games such as Crush the Castle. You'll come up against archers, spearmen, cannons and other more advanced fortifications and it's up to you to control your creation and either deal with, or bypass these defences in order to achieve the objective. Weapons are one shot only, there's no ammo supply in this game. You only get one chance to complete the objective per run - if you choose to rely on projectile weaponry.

A Delightful Blend of Simplicity & Complexity

Perhaps the biggest success with Besiege is the delightful blending of simplicity and complexity which make it one of the best action style castle games from the widest collection. Spiderling Studios have got this absolutely spot on. By removing nearly all of the common restrictions that made the creature and vehicle creation in Spore so maddeningly limiting and combining that with single objective, short levels, they have created an addictive and rewarding challenge. There are hours of fun just to be had trying to create the most efficient machine possible to complete one of the levels - or indeed, the other extreme - the most deadly and complicated looking piece of engineering that won't blow itself up or fall to pieces as soon as you press play. 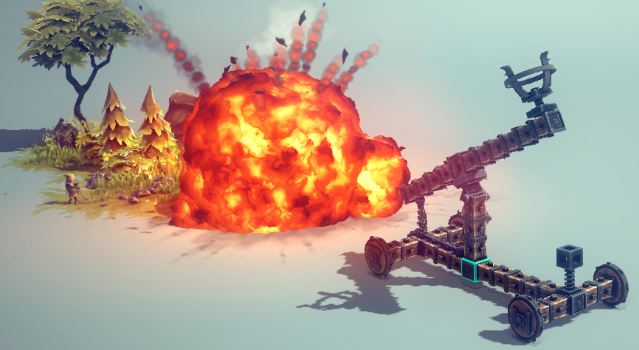 There are a few niggles with the game, though. Before the game hits final release, we feel that they need to work on placing of blocks - it can be extremely fiddly trying to get blocks to go in the right place - especially if you're trying to build underneath an existing block. Sometimes it isn't obvious enough where exactly your block is going to go. The tutorial is threadbare. It explains the interface and helps you build your first machine - but it doesn't really explain how to properly set up a functional steering mechanism, nor does it explain any of the more advanced joints and hinges. The decision to make the game look more like a piece of rendering software isn't going to be for everyone, either. WE can certainly understand why some would consider it too much like a piece of software - there aren't a great deal of 'gamey' elements to it.

Overall, we find Besiege to be one of the highlights of Early Access but we already can see improvements for a sequel we discuss here. It already looks polished, it already has 15 levels to complete and tons of replayability. It's a brilliant concept that, so far, has been executed near perfectly. It just lacks a good way share creations and there's no real ‘play with friends' functionality. For 6.99 euros though? It's an absolute bargain.