Conisbrough Castle is a formidable building dating back to the tenth century. It has been built and rebuilt over the centuries making it one of the most interesting historical sites in England. Here we take a look at its structure in more detail.

The keep can be seen for miles and is an awesome sight to take in when approaching Conisbrough Castle.  It was commissioned designed and built by Hamelin Plantagenet and has five levels. The keep is the oldest part of the building (1180), is built from limestone and is one of the best examples of an ashlar-faced structure in Great Britain. The six buttresses are over ninety seven feet in height and are sited in a circular design which makes this keep unique as it is the only one in the country.

The keep widens at the bottom giving it extra strength with the walls being much thicker at the bottom below ground level reducing to around fifteen feet thick near the door level. The entrance is sited on the first floor which is twenty feet above the court. On the exterior there was a wooden staircase (which today has been rebuilt in concrete) where people would climb to access the keep via a drawbridge.

In the 1990's English Heritage: http://www.english-heritage.org.uk/ along with the Ivanhoe Trust restored the keep to its past glory repairing the roof and the floor. English Heritage took over sole running of Conisbrough in 2008.  Since its restoration the keep has been open to public viewing and is a must see when visiting the area. 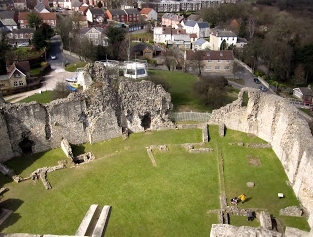 The D shaped court inside the castle is known as the inner ward that measures approximately seventy by forty five metres. The walls are some thirty feet in height with a thickness of eight feet. Most of the walls can still be seen today which is quite remarkable, while the south side of the ward originally featured eight towers of differing sizes. Unfortunately there are only three surviving towers today.

Two of the remaining towers can be seen by visitors to Conisbrough Castle as they approach the Barbican area of the castle. The inner ward was used for daily activities such as chopping wood for the fires where food would be cooked or looking after small animals such as chickens, while its primary function was as the area where troops would gather before embarking on a mission to defend the castle against whosoever was waiting outside.

The inner ward was vital to the castles defences as when defenders were pushed back and had to seek the protection of the keep they could attack the enemy from a safe vantage point in the keep from where they would have had a perfect view. 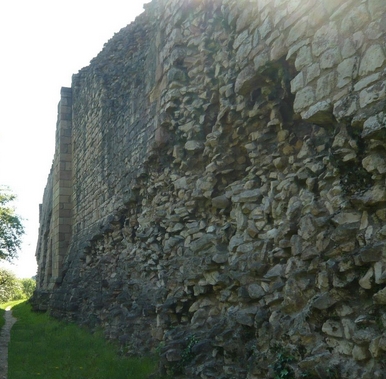 The curtain walls, built around 1210, were paramount for the defence of the castle being an impenetrable barrier for attackers to scale while also providing a safe point where defenders could see everything that was happening on the ground. The original curtain walls would have had battlements but they are long gone. These battlements would have been a safe haven for defending archers to pick off the enemy in relative safety due to their height. The curtain walls were originally sited within a wooden palisade that encircled the keep. 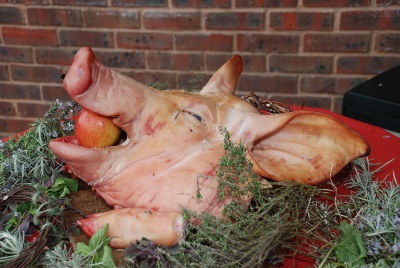 No great castle would be complete without a great hall and Conisbrough is no exception with a hall on par with http://www.edinburghcity.org.uk/attractions/castle/ and https://www.cardiffcastle.com/. The original centrally located hearth that dates back to the thirteenth century can still be seen at Conisbrough. As the hearth was located in the middle of the room the smoke rose up and exited through vents in the ceiling.

During the fourteenth century a new fireplace with a chimney was built into the north wall of the hall and the central hearth was covered. Banquets and dinners would be held in the great hall along with many other festivities over the centuries, while eminent guests were entertained here too. 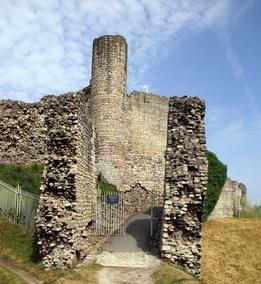 The Barbican was built in the thirteenth century and was a passage where the enemy would enter at one end and become trapped as a portcullis gate would be dropped by the defenders of the castle. At the far end of the barbican would be another gate that was locked from the outset therefore once the enemy entered the barbican there was no escape.